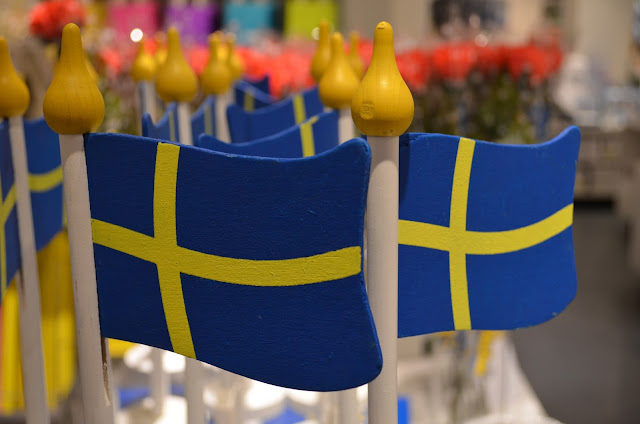 “They are telling us something about not only Sweden but about the world, I think,” says Lena Lind Palicki, from the Swedish Language Council's New Words Group.

“We have words about war and terror and things that happened in  2015, but we also have a lot of words about the internet and other kinds of new phenomena.”

She argued that tumultuous world events of 2015, such as the onward march of ISIS in Syria and Iraq, the EU refugee crisis, and the global deal stuck in Paris on the environment meant news vocabulary was unusually dominant in the annual list.

Such words include 'terror-resan', describing the journeys of second-generation immigrants to join ISIS on Syria,  'sjalvradikalisering', describing those drawn to radical ideologies without face-to-face contact with other extremists, and 'transitflykting', describing refugees entering a country aiming to pass through unregistered.

But she also pointed to new words like 'svajpa' (to swipe, usually between pages on a mobile device), 'nyhetsundvikare' (news avoider), 'klickokrati', a world in which politicians and the media respond slavishly to what internet users click on, and 'faktaresistens' (doggedly sticking to a belief, despite powerful evidence to the contrary) as signs of how the internet was changing the media.

“The idea is that you need new words for a new society, and these kinds of norm-critical words are very popular,” she said. “It started with 'hen' in 2012.”

Another new word in the same category was 'värdgraviditet', roughly ‘care pregnancy’, which is intended to put a more positive spin on surrogate motherhood, or ‘surrogatmödraskap’.

Then there are words which indicate how the internet is changing Swedish society, such as 'rattsurfa', which describes how drivers crawl along slowly in traffic as they simultaneously surf the net, 'ögonkramp', the eye pain experienced by those who spend too long staring at a screen, and 'svischa', to transfer money to a friend or shop using the Swedish phone payment system Swish.

Finally, there are words drawn directly from English, such as 'vejpa', to 'vape' or smoke an e-cigarette, 'douche', meaning a loser, 'groupie', a group photo taken on a mobile phone, and 'cosplay', describing physical roleplay games where participants put enormous effort into their appearance.

Here are the top 20 new words from the Swedish language council’s 2015 list.

A prefix describing anything purtaining to those with developmental disorders

To disinvest, normally by selling shares in companies involved in industries viewed as unsustainable or unethical

A migrant from another EU country.

Self-radicalisation. The phenomenon through which some people are drawn into extremist ideologies without face-to-face contact with others.

A journey to another country to join a terrorist organisation. Used in 2015 to describe those travelling to Syria and Iraq to join ISIS.

A refugee crossing a country with the aim of getting to another country where they aim to register as an asylum seeker.

The sharing economy. Used to describe internet and mobile apps like Airbnb, where people rent out their houses, or cars to others.

To dumpster dive, or retrieve useable food and other objects from what others throw away

A group photo taken on a mobile phone

to 'vape' or smoke an e-cigarette