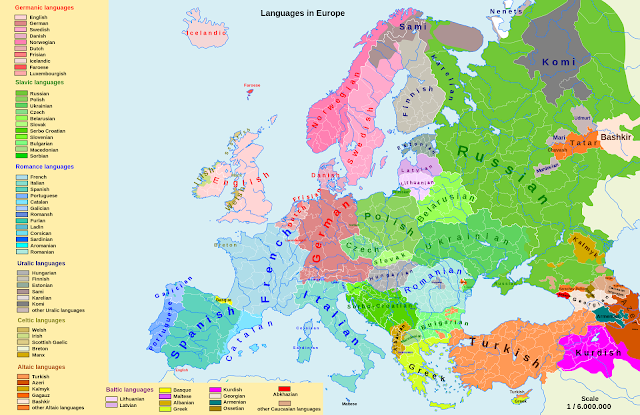 Other countries and regions

Some sources also add neighbouring countries for historical (the former Austro-Hungarian and German Empires, and modern Baltic states), based on geographical and/or cultural reasons:
·        Croatia (alternatively placed in Southeastern Europe)
·        Romania (Transylvania  and Bukovina)
The Baltic states, geographically located in Northern Europe, have been considered part of Central Europe in the German tradition of the term, Mittleuropa.

The Germanic languages are a branch of the Indo-European language family spoken natively by a population of approximately 500 million people  mainly in North America, Oceania, Central Europe, Western and Northern Europe

Other major West Germanic languages are Dutch with 23 million speakers, Low German with approximately 5 million in Germany  and 1.7 million in the Netherlands, and Afrikaans, an offshoot of Dutch, with over 7.2 million.

The main North Germanic languages are Norwegian, Danish, Swedish, Icelandic, and Faroese, which have a combined total of about 20 million speakers.

The East Germanic branch included Gothic, Burgundian, and Vandalic, all of which are now extinct. The last to die off was Crimean Gothic, spoken in the late 18th century in some isolated areas of Crimea.

The common ancestor of all of the languages in this branch is called Proto-Germanic, also known as Common Germanic, which was spoken in approximately the middle-1st millennium BC in Iron Age Scandinavia.

Proto-Germanic, along with all of its descendants, is characterized by a number of unique linguistic features, most famously the consonant change known as Grimm's law.

Early varieties of Germanic enter history with the Germanic tribes moving south from Scandinavia in the 2nd century BC, to settle in the area of today's northern Germany and southern Denmark.

You have found a world-class translation company specialising in region-specific languages and offering translation services from and into Northern European languages.

However, other companies are specialised in translating, not only from regional or resident languages, but also within specific industries, like healthcare, legal, technical documents, websites and other such texts.

There are translation companies which are backed by global stock markets and various funds, with an annual turnover of hundreds of millions. Such as Transperfect, Semantix, Lionbridge, Welocalize, LanguageLine Solutions and other Top 100 companies. These Language Service Providers (LSP) are particularly important to medium-sized and small translation agencies, which tend to buy specialised language services from them. Some medium-sized translation agencies work only as providers to the Top 100, while also being on this list.

How to Reduce Translation Costs Without Sacrificing Quality

Why Human Translation Services is Your Best Choice?

In order to receive a quotation for translation service from and into CEE languages, please contact us by using a free quotation form.