English Will Not Be an Official EU Language After Brexit*

English will not be an official EU language after Brexit, says senior MEP
No other EU country has English as their official language and so it could lose its status. 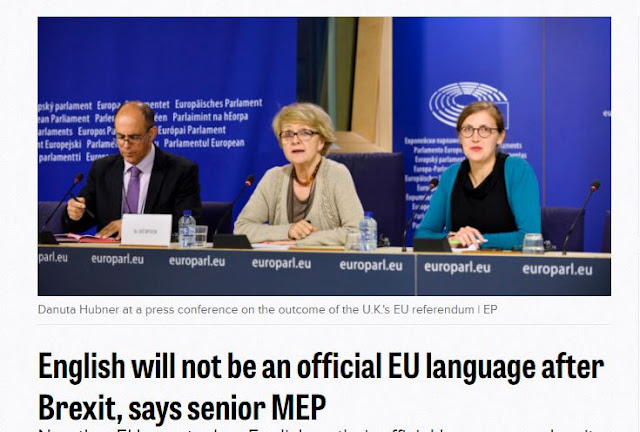 Danuta Hübner, the head of the European Parliament’s Constitutional Affairs Committee (AFCO), warned Monday that English will not be one of the European Union’s official languages after Britain leaves the EU.

English is one of the EU’s 24 official languages because the U.K. identified it as its own official language, Hübner said. But as soon as Britain completes the process to leave the EU, English could lose its status.
“If we don’t have the U.K., we don’t have English,” Hübner said.
English is one of the working languages in the European institutions, Hübner said, adding: “It’s actually the dominating language,” the one most frequently used by EU civil servants.
The regulation listing official languages of the EU would have to be changed unanimously by remaining countries if they want to keep English as an official language, Hübner said.
However, an EU source explained that the regulations governing official languages are themselves subject to more than one translation. The 1958 regulation regarding the official languages of the EU, which was originally written in French, does not say clearly whether a member country – Ireland or Malta for instance — can have more than one official language, an EU source said. Interpretations of the French wording tend to conclude that this might be possible, whereas the English version appears to rule this out.
When Ireland and Malta joined the EU, English was already an official language, which is why the two countries asked for Irish and Maltese to be added to the list.
“If a member state has more than one official language, the language to be used shall, at the request of such state, be governed by the general rules of its law,” the regulation says.
“The rules governing the languages of the EU institutions shall be determined by the Council, acting unanimously by means of a regulation,” a European Commission spokesperson said, adding the rules “have been amended several times to take account of the different enlargements.”
The Commission has already started using French and German more often in its external communications, as a symbolic move after Britain voted to leave the EU last Thursday, according to the Wall Street Journal.
Meanwhile, the president of the regional council of Tuscany, Eugenio Giani, called for Italian to become one of the official languages of the EU. “We have not defended … our language as we should have, both on the European continent and in the world,” Giani said following the British referendum result.
Source: Politico.eu
Email Post
Labels: Brexit English Frenxh German language Official EU language translation translation services