Iran Will See an Economic Rebound 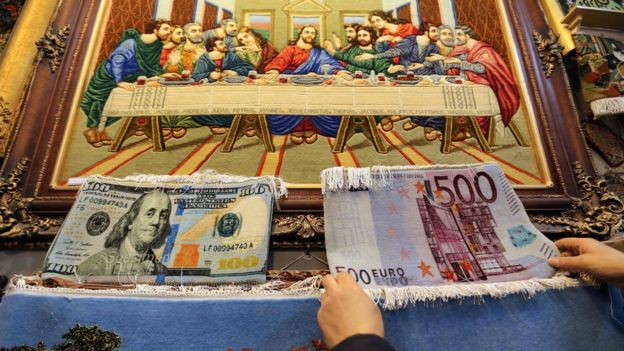 Economic sanctions on Iran have been lifted after it agreed to roll back the scope of its nuclear activities. What does this mean for Iran and the rest of the world?
Iran will see an economic rebound.
The lifting of sanctions has opened the Iranian economy - one of the last great untapped emerging markets - to international trade and investment.
Iran can now return to the oil market, and is expected to start exporting an estimated 300,000 barrels per day immediately. This, in an already oversupplied market, will contribute to the falling price of petrol for consumers across the world.
Iran will also have access to more than $100bn (£70bn) of money that was frozen overseas. However, it can only spend about $30-50bn, as the rest is thought to be been locked into previous commitments.
The money may be used to import goods and services to renovate and modernise many of Iran's economic sectors. Already, Tehran is in talks to buy Airbus passenger aircraft by the dozens. The lifting of banking sanctions also means Iran is reconnected to the world financial network.

The untangling of the world's most complex regime of sanctions starts now.
The European Union terminates all its nuclear-related economic sanctions including an embargo on buying Iranian crude oil, but more importantly, ends restrictions on Iranian trade, shipping and insurance.
"This is a day we were awaiting for years. There will be big changes," says Michael Tockuss, managing director of the German-Iranian chamber of commerce.
"We will also get some 300 Iranian individuals and companies off the (EU) sanctions list. Up to now, we couldn't do a single business transaction with them, not even selling bread or biscuits."
What it means for Iran
At current prices, the lifting of energy sanctions means Iran could increase its revenue from oil exports by $10bn (£6.9bn) by next year
Iran's central bank says lifting banking sanctions will allow $30bn of foreign reserves currently frozen in accounts around the world to be brought back - the US Treasury says the figure is $50bn
With sanctions gone Iran could boost its GDP growth to around 5% in 2016-17, from almost zero currently, says the International Monetary Fund
Sanctions have added 15% to the cost of trading with Iran and lifting them will save the country some $15bn yearly in cheaper trade, says Iran's first Vice-President Eshaq Jahangiri
Cheaper oil
With the lifting of sanctions Iran will be able to export as much crude oil to the world as it can, or as much as it can find demand for.
Before imposing an oil embargo on Iran in 2012, one in every five barrels of Iranian crude went to European refineries.
Iran has been selling just over one million barrels a day for the past few years, mostly to China, India, Japan and South Korea.
Tehran says it will hike sales by 500,000 barrels the day after sanctions are lifted and increase total exports to around 2.5 million barrels within the next year.
This will push the price in only one direction: downwards. The market is already flooded by cheap oil and there will be many more barrels in the market than there are buyers.
In order to win back its customers, Iran plans to offer discounts on prices that are already the lowest in 11 years.
Iran's full return to the market could trigger a price war with its arch-rival Saudi Arabia, which is trying to keep its own market share by selling under the market price.
Big banks
But the biggest bottleneck in future business with Iran could be banks. Although Iran will again be connected to the global financial system it is unclear how many banks will re-engage in Iranian business.

About how to invest in Iran
There are currently very few countries in the world with Iran’s conditions and opportunities for investment. After decades of sanctions and separation from international markets, Iran is now ready to take advantage of these opportunities.
These days the top story of some of the world’s most important news media states, “Now that a general agreement has been reached on the nuclear issue between Iran and the P5+1, international investors are lining up behind Iran’s closed doors, ready to enter this country’s market. Once Iran’s doors open to international financial activities millions, or maybe billions of dollars will flow into the country …”
Why Iran?
Compared to other parts of the world, Iran has significant economic potentials: energy sources, mineral sources, transit opportunities, temperate climate, and a population with a high literacy rate, tourism opportunities, and many other items that can be found with a simple search. Without any exaggeration, we are inviting you to an investment paradise for years to come. Let’s take a look at Iran’s unique conditions and its potentials:
Characteristics and Advantages of Iran’s Economy
Natural and Mineral Resources
Sources: BBC ,  How To invest in Iran

Language family: Indo-European languages, Iranian languages, Persian
Persian, or Farsi as it is called by those who speak it, is a language spoken in Iran, Tajikistan, Afghanistan, parts of Georgia, India and Pakistan. The language has developed much in the last few centuries. A great many words have also been loaned from geographically neighbouring languages; firstly from Armenian and Greek, but subsequently from Arabic and to some extent Turkish. In recent years, a lot of western words have been loaned, mainly from English and French.
Official language of: Iran, Qatar.
Language code ISO 639-1: FA

Persian, also known as Farsi, is primarily spoken in Iran, Afghanistan, Uzbekistan and Tajikistan
Historically, the areas where the language is spoken range from the Middle East to India, but today, Persian is understood in parts of Armenia, Azerbaijan, India, Iraq, Kazakhstan, Pakistan, Turkmenistan and Turkey
There are large groups of Persians who migrated to the USA and Europe, and Los Angeles is often referred to as ‘Tehrangeles’

It's very common to use the word    مرسی [Mersi] in Persian to sayThank you, as in the French ‘merci’
In fact, there has been a long historical relationship between Iran and France, and you’ll find hundreds of French words in everyday Persian vocabulary. For many years, French was the second language in Iran and words relating to science and technology are commonly used. For example:
رادیو [râdio], radio
شوفر [shoufer], chauffeur
شوفاژ [shauffage], heating
دوش [doush], shower
اتومبیل [otomobile], automobile
اتوبوس [otobus], bus
Due to historical links with Britain, many Persian words have been borrowed and crop up in the English language, such as:
پسته [pesteh], pistachio
سوپ [soup], soup
اسفناج [s-fenaj], spinach
قندی [ghandy], candy
لیمو [lim-ou] , lemon
زعفران [zafarân], saffron
بازار [bâzâr], bazaar
Source: BBC
Email Post
Labels: economic sanctions emerging markets how to invest in Iran international trade and investment. Iran Iranian economy oil prices Persian language translation into Persian translation services