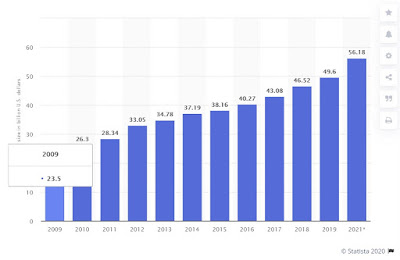 With the world becoming increasingly interconnected, the global language services market has seen rapid growth. Over the last ten years the market has doubled in size, reaching 46.9 billion U.S. dollars in 2019.


Generally speaking, the language services market can be divided into three segments – instruction, translation and localization. Translation differs from localization in that the former involves tasks where one language needs to be directly translated into another. This includes traditional activities such as document translation and interpreting services. Localization, on the other hand, refers to a broader process of cultural adaption, generally in more artistic areas such as creating voice over for film and television. Depending on the context, either service may be required for digital platforms and online content.


As is perhaps not surprising given the region’s high level of development and linguistic diversity, Europe accounts for around half of the global language services market. The small size of the Latin American market may appear surprising though; given Spanish is the second-most spoken language globally. This, along with the large size of the North American market, may be in part explained by the high level of demand for Spanish content within the United States.

Given its diverse range of languages and high level of economic development, it is perhaps not surprising that Europe is home to the largestlanguage services market in the world, comprising almost half of the global market.

The language services market covers a broad range of activities, from language instruction to professional translation services to localization and voice-over services for media such as film, television, and video games. With the world becoming increasingly interconnected through technology, this market has more than doubled since 2009, with an expected global value of almost 50 billion U.S. dollars in 2019. And, there is good reason to expect this market to continue growing – especially given that the market share of the Asia Pacific region is relatively low, yet the region is home to five of the ten most commonly spoken languages in the world.

Technology is playing an increasingly important role in the language services industry. Machine translation, which is the process of using software to translate from one language to another, is a fast-growing field that is expected to more than triple in size from 2017 to 2024. Accordingly, the two largest providers in the global language services market – Transperfect and Lionbridge – are investing heavily in this area, offering software based ‘artificial intelligence’ translation in conjunction with their more traditional translation services.