What ever happened to the H&M boycott ? “Coolest monkey in the jungle ? What happened ? Ya shopping there ? These H&M shops looks pretty full. pic.twitter.com/1MG1zYaiQl
— JAY MULA (@iamjaymula) February 16, 2019

Companies still learn the hard way that almost all the content they publish – or that is created by their customers and prospects – is global.

Whether or not content is translated or intended for a specific audience, all viewers have access to it and make their opinions heard at the global level – especially if they have negative feelings.
As content plays a larger strategic role in business success, organizations are looking for ways to do a better job to world-proof the words, images, and audio that project their brand.
In this article, we describe the challenge of global content missteps, provide examples, and offer advice on how to avoid becoming a bad localization meme.
Firms generally recognize that content has value in supporting their brand worldwide and attracting and retaining customers. However, executives tend to over-invest in the creation of the original material while scrimping on the localized versions upon which they often depend for a hefty portion of their revenue.

This disproportionate spending frequently results in a lack of oversight during the design phase, which can lead to embarrassing, if not disastrous, results in terms of PR. Worse yet, the missteps can cause a reduction in overall brand value and market cap numbers over the short term, as well as adversely impact the career path for C-level executives.
All organizations want to avoid being the poster child of global marketing missteps. Yet, examples unfortunately appear all too often:
H&M’s catalog miscalculation

Regardless of one’s opinion of its appropriateness, you have to wonder how the original product and accompanying marketing content for a T-shirt ad in January 2018 survived internal review at fast-fashion retailer H&M.
Even if its home base in Sweden was not offended by the product, H&M only had to ask personnel in top markets such as the United States, Germany, France, or the United Kingdom what they thought before proceeding with the design idea.
As a result, H&M lost clothing line collaborators such as Weeknd and faced a high level of backlash from U.S. customers. 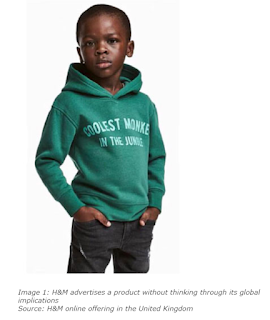 Image 1: H&M advertises a product without thinking through its global implications
Source: H&M online offering in the United Kingdom

Asia has always been a strategic market for United – long before the rise of China – so one would expect that its corporate behavior is followed closely. However, the company’s crisis response team failed to take that into account when news broke about an outsourced security team dragging a passenger off one of its planes under rather violent circumstances. It turned into an international incident as hundreds of millions (not thousands) of people commented on Weibo, with some even cutting up their United frequent flyer cards. Calls for boycotts spread throughout Asia – especially worrying since China is the second-largest market in the world for aviation and still growing. The company briefly lost almost US$1 billion due to the incident.

Yelp’s obliviousness in the face of Turkish history

When the review forum Yelp announced via Twitter last year that it was entering the Turkish market, it rather oddly chose the image of a church for a country that is overwhelmingly Muslim – comparable to using a mosque graphic for an announcement targeted at North Americans. That being said, the church image didn’t match what most Turks see in their country, as the construction of Christian Orthodox churches doesn’t resemble the humble wood building depicted in the image. But even more bothersome to many Turks was the mention of the Trojan Horse used to hide Greek soldiers for an ambush during the war for Troy. 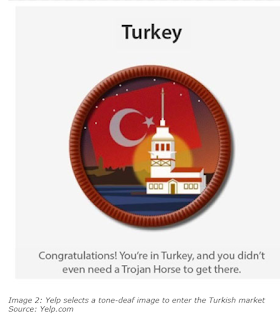 The companies in the examples cited are certainly not the only global brands that have stumbled over global messaging and content. Yet it’s impossible for even the most global-savvy person or team to recognize all possible cross-cultural reactions to a particular message, image, or video. So, what is a company to do?