The languages that take the most (and least) time to learn, per the US Foreign Service

Learning a new language takes time. But according to US diplomatic training guides, there are many languages that Americans should be able to learn in under a year.
The map below shows how long it takes to learn almost 70 different languages, estimated by the Foreign Service Institute, which teaches these languages to would-be or current diplomats. 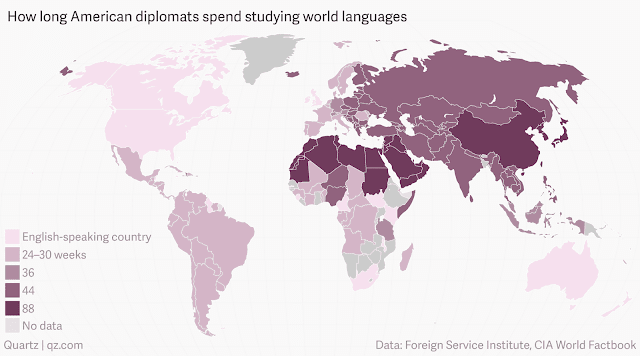 Countries on the map are colored according to how much time it takes to learn the local language: The darker-colored the country, the longer it takes.
The CIA Factbook was used to identify a dominant language for each country. Countries with no clear dominant language, like multilingual Mozambique, or where the FSI doesn’t teach the dominant language, appear gray.
FSI language-learning categories are numbered like hurricanes—higher number, scarier language. The darkest countries on the map represent Category 4 languages, those that take the longest for Americans to learn: Arabic, Cantonese, Mandarin Chinese, Japanese, and Korean. FSI literature refers to these as “super-hard languages.”
After that are 50 merely “hard” Category-3 languages, including Czech, Hindi, Russian, and Thai. The final two categories include languages that are more closely related to English. (See the full table of languages below.)
The numbers of weeks in that map represent the amount of time a learner with no experience of a language will need to get to “3/3 proficiency,” meaning a three out of five for speaking/reading. A zero, the FSI writes, indicates “only a cursory level knowledge of the language,” while five shows a “highly articulate, well-educated, native-speaker proficiency.” As of last year, there were over 4,200 staffers in the FSI with at least this 3/3 level of proficiency, in “about 70 languages,” according to a recent report(pdf).
One thing to note here. These estimates, like 24 weeks for Spanish, assume the learner is in one of the FSI’s intensive courses. For the hardest languages, like Chinese, the course may even include several months of immersive study abroad. What’s more, the FSI sets out to hire smart, worldly people, and its estimates assume the student has “very good or better aptitude for classroom learning of foreign languages.” So the idea that it “takes 44 weeks to learn Finnish” is not very meaningful to most people.

There is no absolute answer to which language is the “easiest” or “most difficult,” because every learner is different. A native English speaker will have a harder time learning Italian than a native Spanish speaker, since the two Romance languages are closely related. And some people find pronunciation in a tonal language like Vietnamese difficult, while others adapt easily. The FSI difficulty measurements are also a bit confusing based on the “speak/read” requirement. Mandarin grammar is not nearly as complicated as that of some European languages, but the complexity of the Chinese writing system puts it in the highest category.

The map does show, though, a general trend of increasing the difficulty the farther American English-speakers get from the United States—starting with Europe and South America and continuing to Western Asia and East Asia—with obvious exceptions like Australia and the relative ease of Indonesian compared to Japanese or Chinese. The map also shows how much easier colonialism has made things for speakers of Western languages.
Here is the full list of FSI languages, and their difficulty rankings: