Online Use of Languages in the EU: Customers Are Six Times More Likely to Buy From Sites in Their Native Language. 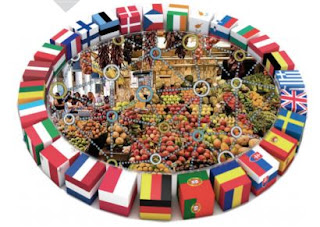 Current research* on the online use of languages in the EU demonstrates that there is increasing pressure to overcome language barriers. Online content in hitherto dominant languages is declining and “long-tail” languages are rising.**

In line with the constant rise of online content, absolute numbers are rising for all languages, and much more significantly so for less common languages. One example in Europe: Basque, Galician, and Catalan all have an increasing share vis-a-vis Spanish; even though the numbers are small, they indicate a long-term shift.

Customers are six times more likely to buy from sites in their native language. Most EU languages address less than 3% of the market, fundamentally limiting SMEs operating in countries where those languages are spoken. English is not the answer. 52% of EU customers do not purchase from English-language sites.

Adding even a few languages to an SME’s website beyond English can have a major impact on revenue. Large organizations today often localize products and websites into ­50 or more languages to increase market share.

This trend goes hand in hand with increasing public demand for content in regional or local languages due to the increasing availability of broadband as well as high speed mobile connectivity and rising numbers of online users and online services. Europe’s citizens are no longer satisfied with using only a few major languages.

As a consequence, businesses that cannot provide content in local languages will be global losers. Furthermore, the numbers indicate that market saturation for dominant languages has been reached and that any additional growth is coming from outside the established markets, historically served by a smaller set of languages***

If we extrapolate the trends reported by Common Sense Advisory, it only took 37 languages to reach 98% of the world online population in 2009, but already 48 in 2012. The predicted number in 2015 is 62 languages. More and more citizens are connected and, as a consequence, more and more citizens use – and expect to use – their own native languages in any online activities. However, they are excluded from participating in many online activities due to the fact that language barriers constitute market barriers – especially so with regard to the DSM (Digital Single Market). True engagement with consumers across language barriers is also deeply entwined with the user’s technical, cultural, and individual awareness, preferences, and requirements. The power of personalizing any cross-linguistic exchange to an individual user means we should not merely bridge the language barrier but provide the kind of compelling personalized user experience that is key to a vibrant and competitive DSM.

As Europeans, we urgently need to ask ourselves some crucial questions: Can Europe afford continued language-blocking, market fragmentation caused by language borders, language discrimination, and, eventually, digital language extinction?
Can we afford to have our information, communication and knowledge infrastructure depend so much on monopolistic services provided by foreign, non-European companies, effectively constituting technological lock-in?
What is Europe’s fallback plan in case the language-related services provided by non-European companies that we rely upon are suddenly switched off or if even more serious access or security issues arise?
Is Europe actively making an effort to compete in the global landscape for research and development in language technology?
Can we expect third parties from other continents to solve our translation and knowledge management problems in a way that suits our specific communicative, societal and cultural needs?

Language Technology made for Europe in Europe will significantly contribute to future European crossborder and cross-language communication, economic growth and social stability while establishing for Europe a leading global position in technology innovation, securing Europe’s future as a world-wide trader and exporter of goods, services and information. Only a large, coordinated push of this magnitude will be able to unlock a truly multilingual Digital Single Market.

**Common Sense Advisory (2013): “The Rise of Long-Tail Languages”.
*** “Traditional ‘power house’ languages are seeing some of the biggest drops in overall site support: e.g. German: –11.7%, French: –13.4%, Spanish –14.4%, i.e. a smaller percentage of ‘global’ sites are supporting these languages, even as the number supporting long-tail languages is increasing.” (ibid.)


In order to receive a quotation for translation and localization service, please contact us by using a free quotation form.