THE COLLINS WORD OF THE YEAR 2022 IS...PERMACRISIS 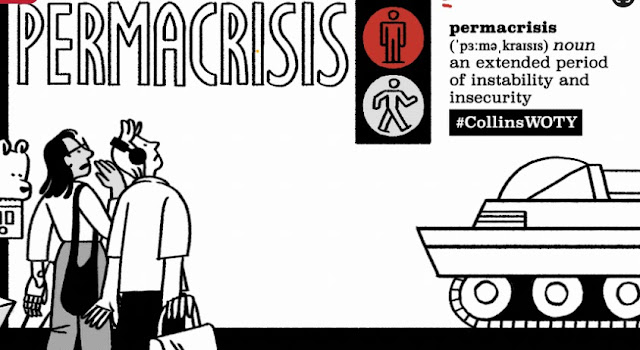 ‘Permacrisis’, a term that describes ‘an extended period of instability and insecurity’, has been named Collins Word of the Year 2022.

It is one of several words Collins highlights that relate to ongoing crises the UK and the world have faced and continue to face, including political instability, the war in Ukraine, climate change, and the cost-of-living crisis.

Six words on Collins’ list of ten words of the year are new to CollinsDictionary.com, including ‘permacrisis’.

A year of ‘permacrisis’

1st Nov 2022
The 2020s have certainly seen their fair share of upheaval – and we’re only two years in! Already this decade we’ve had to contend with a pandemic and its aftermath, a brutal new war in Europe, and in the UK an economic crisis that saw the Bank of England warning of a “material risk to financial stability”. We’ve also had three prime ministers – so far.

How fitting, then, that 2022’s Word of the Year is permacrisis, a term that perfectly embodies the dizzying sense of lurching from one unprecedented event to another, as we wonder bleakly what new horrors might be around the corner. Collins defines it as “an extended period of instability and insecurity” and that certainly rings true. Much more of this and we might have forgotten what stability and security ever felt like.

The current permacrisis also happens to be responsible for some of the other words on this year’s shortlist – not surprising given its all-consuming nature. Partygate, of course, is one of the events that set off the period of political turbulence whose ramifications are still playing out. It proves that the “-gate” suffix – made famous by the discovery of secret recordings in Washington DC’s Watergate Hotel – still has some life in it.

Russia’s invasion of Ukraine produced an energy shock to which warm banks – places where those too poor to heat their own homes can gather in the event of a cold snap –are one proposed solution. The lexical analogy here is with another grim indicator of economic crisis, the food bank. The invasion also meant that we all quickly learned the Ukrainian spelling and pronunciation of the city of Kyiv. And while warfare may be Russia’s preferred tactic, increased scrutiny of Russia’s super-rich has led to a crackdown on lawfare, the use (or abuse) of legal powers to silence opponents.

In the labour market, changes have been afoot too. There’s been a vibe shift away from the culture that defined the world of work pre-pandemic: now people are less concerned with climbing the greasy pole, and more with quality of life. This has led to an epidemic of so-called quiet quitting, which, as Collins puts it, involves “doing no more work than one is contractually obliged to do”. For burnt-out millennials, it’s a third way between making your job your life and quitting altogether. Work-life balance is important, so why not relax as the year draws to a close by watching some football? The FIFA World Cup is due to start this month in Qatar – but beware the spectre of sportswashing, which some have accused the Qatari authorities of doing, given concerns around human rights and the welfare of migrant workers. This follows the pattern that has given us “greenwashing“, and of course goes back ultimately to “whitewashing“– blotting out imperfections with a thin coat of paint.

All in all, it’s a difficult note on which to begin the Carolean era, which the new king, Charles III, will preside over (the medieval Latin for Charles is, of course, Carolus). Let’s hope this is just a shaky start, and things will improve soon, Your Majesty. In the meantime, we all could be forgiven for just wanting to join our furry friends in splooting – which, Collins explains, is the act of lying flat on the stomach with the legs stretched out – until all of these problems have gone away.

Written by David Shariatmadari, author of Don’t Believe A Word: From Myths to Misunderstandings – How Language Really Works

All opinions expressed on this blog are those of the individual writers, and do not necessarily reflect the opinions or policies of Collins, or its parent company, HarperCollins.