Lexical Distance Among the Languages of Europe 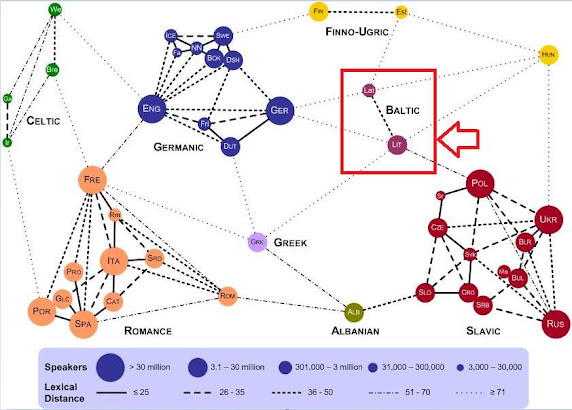 How close do you think your language is to another one? Which linguistic relations between European languages did you expect? Check it in the chart below, extracted by an original research data by K. Tyshchenko (1999), Metatheory of Linguistics. (Published in Russian.)

This chart shows the lexical distance — that is, the degree of overall vocabulary divergence — among the major languages of Europe.

The size of each circle represents the number of speakers for that language. Circles of the same color belong to the same language group. All the groups except for Finno-Ugric (in yellow) are in turn members of the Indo-European language family.

So why is English still considered a Germanic language? Two reasons. First, the most frequently used 80% of English words come from Germanic sources, not Latinate sources. Those famous Anglo-Saxon monosyllables live on! Second, the syntax of English, although much simplified from its Old English origins, remains recognizably Germanic. The Norman conquest added French vocabulary to the language, and through pidginization it arguably stripped out some Germanic grammar, but it did not ADD French grammar.

Northern Europe is our Linguistic Region

Our most commonly used Western and Central European languages include:

Our most commonly used Asian and Middle Eastern languages include:

Source Lexical Distance Among the Languages of Europe